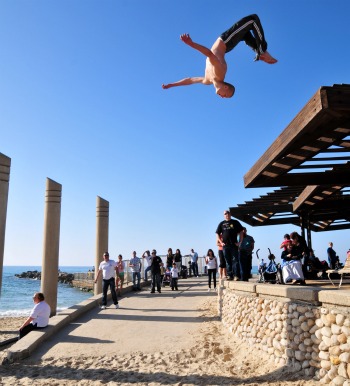 Your first thought when thinking about skydiving may be the typical image of someone parachuting in a jumpsuit from thousands of feet in the air. Did you know though, that there are some creative and exciting new additions in the skydiving field? If you are new to the sport of skydiving or even an old hand at it, you may want to know more about the lesser known types. Who knows? Maybe one of the less popular versions of skydiving may be just what you are looking for.

Among the several types of skydiving, BASE jumping is actually considered to be the most extreme and dangerous. BASE is an acronym which refers to the Building, from which a person can jump from; Antennae, which can be an aerial mast, uninhabited structure or tower; Span, which is a bridge-like structure; and Earth, meaning cliffs, mountains or canyons. BASE jumping is only done by very experienced skydivers because it includes big risks.

Wing-suits are a commonly used and very popular piece of parachute equipment with BASE jumpers. Wearing a wing-suit is not parachuting in the traditional way, yet gives the jumper the ability to turn a sixty second jump into a much longer span of three minutes. Using a wing-suit while skydiving and BASE jumping is only done by very experienced divers and it is highly recommended that a person have hundreds of jumps under their belt before they decide to try the suit.

Sky-surfing is a form of skydiving that is said to be an even more extreme and adrenaline-pumping rendition of skydiving. During sky-surfing, the skydiver uses a board that is somewhat similar to a snowboard, but in a smaller size and is attached to the diver’s feet. Sky-surfing is thought to be hard simply because a board attached to your feet is extremely hard to control. Even simply trying to stand straight requires some skill and precise balance that can only be gained from considerable experience in free-flying.

Just like in free-style skydiving, during sky-surfing you have an auxiliary partner whose duty is to take skydiving video of your sky-surfing performance. The boards can be detached while you are in mid-air as a safety precaution. But, this can create an extra hazard for those on the ground. Skydiving equipment falling from such a great height can kill, which is why not every skydiving center allows this kind of skydiving.

Sky-surfing uses a different type of parachute called a sport parachute, which is different than the traditional chutes used in other areas of skydiving, like military parachutes for instance. When it comes to the boards used, the person just beginning to sky-surf should start out with a board that is around 35 inches long, with perpendicular bindings for increased stability. You can progress to longer, more advanced boards that give you greater mobility for difficult stunts and parachute games as your skill level increases.

Once a person has their full skydiving certification, the next step for anyone interested in BASE jumping, sky-surfing or wearing wing-suits is to find a mentor in the jumping community who can teach them how to approach some of the more ambitious free-falls. Parachuting in those types of unusual conditions can be a recipe for disaster if a person is not truly prepared.