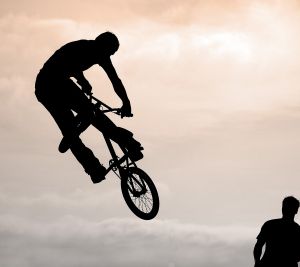 Edinburgh is known to the locals as “an old lady w’ a fur coat and nae knickers” which describes this haughty, grey, beautiful city to perfection – the respectable and the disreputable have always lived here, cheek by jowl. But something’s been giving the old girl a bit of a thrill over the past few months – a dashing young chap from the far-away Isle of Skye has been making himself free about her person, risking life and limb to conquer some of her less-well-known spaces.

Dave Sowerby has been filming Danny MacAskill’s amazing stunt biking across the city for many months. Beautifully paced and edited, featuring a haunting, spiralling Band of Horses soundtrack, these short films showcase the artistry of their subject – and if you’re needing a little inspiration, they’re must-see.

Parkour – “freerunning” in English – has been around for over a hundred years. Originating in France, its modern disciples run, jump, leap and apparently defy gravity as they explore the vertical and horizontal surfaces of the blighted urban landscapes which are their habitat. The striking, exquisitely calculated stunts make us see our cities as never before – it’s a truly original and genuinely thrilling, grass-roots fitness movement which has inflamed the passion of urban adventurers from Jakarta to Jersey.

Central to Parkour is an heroic ethic derived from the ideas of Georges Hebert and the Belle family, French military visionaries who promoted the idea that strength and athleticism should serve mankind, not just glorify those who embody it. Danny brings the ethic of Parkour to bike stunt riding: he loves his sport, and through his words and the spectacle of his riding itself communicates that love and a dedicated, resilient, “can-do” courage which are the very opposite of the egoism and exploitation which dominate commercial sport, where only money talks and the most money talks loudest.

In this, as in all Parkour, watching is integral to the game. There would be no sport without the medium of video – clever edits and angles amplify the sense of risk and interest as Danny – incredibly – manoeuvres his bike across the spikes atop a cast-iron fence, pirouettes across a plaza or runs up a tree. I’m looking forward to seeing a lot more of David’s work in the near future.

Danny’s had great sponsorship from Inspired, who make his frames and forks and no doubt underwrite the costs of filming. It’s surely a great investment for them but even more than that, it’s a gift they, David Sowerby and Danny himself give the whole world. Catch him now, on YouTube at: